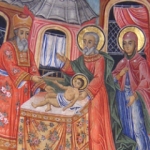 ‘It is the decision of the Holy Spirit and of us  not to place on you any burden beyond these necessities, namely, to abstain from meat sacrificed to idols, from blood, from meats of strangled animals, and from unlawful marriage. If you keep free of these, you will be doing what is right. Farewell.’ And so they were sent on their journey. Upon their arrival in Antioch  they called the assembly together and delivered the letter.  When the people read it, they were delighted with the exhortation. (Acts 15:28-31)

What to do about the Gentiles? That was THE question of the early Church. It was really brought home when Paul had such success among the Gentiles—folks who knew nothing about Jewish Law nor its corporal and dietary ramifications. The big issue, of course, was circumcision. You can do that to a little baby boy, but to a fully grown adult male—probably not. And as the passage notes, circumcision as a “necessity” was NOT mentioned. And everyone was “delighted.”

Then they gave lots to them, and the lot fell upon Matthias, and he was counted with the Eleven Apostles. (Acts 1:26)

The choosing of Matthias seems a bit of a backhanded compliment—he was just filling a slot and he was to be martyred for his trouble. According to legend, Matthias was martyred by beheading which is why he’s always pictured with the axe close by. Unfortunately, very little is really known about Saint Matthias.  But in Mexico, Saint Matthias has a tequila named for him: San Matías.

WEDNESDAY, WEEK V of EASTER, Our Lady of Fatima, May 13

Some who had come down from Judea were instructing the brothers, “Unless you are circumcised according to the Mosaic practice, you cannot be saved.” (Acts 15:1)

From the beginning of the church there have always been folks who wanted to exclude others. “If you don’t do such-and-such or believe this-or-that, you’re not a real Catholic.” Thank goodness the Lord reminds us that He’s the Vine, we’re just the branches . . . only one thing is necessary to stay rooted in Him.

It’s the same story with Our Lady of Fatima. The message of Fatima has nothing to do with secrets, nor visions of Hell, nor messages from angels, nor threats of dire punishments. Basically, the message is very simple: “Repent and pray!”

The (apostles) strengthened the spirits of the disciples and exhorted them to persevere in the faith, saying, “It is necessary for us to undergo many hardships to enter the Kingdom of God.” They appointed presbyters for them in each Church and, with prayer and fasting, commended them to the Lord in whom they had put their faith. (Acts 14:22-23)

Ministry in the early church was fluid. Apostles and teachers eventually give way to overseers (bishops) and elders (presbyters). And of course there were always the table-waiters (deacons). What is interesting is that the early church did not use religious terms for its ministers. The early church knew about priests and high priests (Jewish Temple) and pontiffs (Roman State religion), but it chose not to use those terms. Rather, overseers, elders and table-waiters, terms from everyday life described the ministry and the service to which they were called. It was only much later did those other terms began to be used of Christian ministers . . . but only by way of analogy. In the New Testament there was only one priesthood,  that of our Great High Priest, Jesus Christ, and of the entire priestly people of God.

At Lystra there was a crippled man, lame from birth, who had never walked. He listened to Paul speaking, who looked intently at him, saw that he had the faith to be healed, and called out in a loud voice, “Stand up straight on your feet.” He jumped up and began to walk about. When the crowds saw what Paul had done, they cried out in Lycaonian, “The gods have come down to us in human form.” They called Barnabas “Zeus” and Paul “Hermes,” because he was the chief speaker. (Acts 14:8-12)

Poor Paul and Barnabas . . . folks wanted to offer sacrifice to them. But the apostles prevented them:

“We proclaim to you good news that you should turn to the living God, who made heaven and earth and sea and all that is in them.” (Acts 14: 15)

As the Psalmist says:

You are “a chosen race, a royal priesthood, a holy nation, a people of his own, so that you may announce the praises” of him who called you out of darkness into his wonderful light. (1 Pt 2:9)

Philip said to Jesus, “Master, show us the Father, and that will be enough for us.” Jesus said to him, “Have I been with you for so long a time and you still do not know me, Philip? Whoever has seen me has seen the Father.” (Jn 14:8-9)

This passage has been interesting in the art of the church.