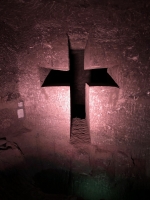 This, rather, is the fasting that I wish: releasing those bound unjustly, untying the thongs of the yoke; Setting free the oppressed, breaking every yoke; Sharing your bread with the hungry, sheltering the oppressed and the homeless; Clothing the naked when you see them, and not turning your back on your own. (Is 58:6-7)

Fasting is not about my losing weight. Fasting is about doing justice. It’s not optional.

If anyone wishes to come after me, he must deny himself and take up his cross daily and follow me.  (Lk 9:23)

A good reminder for this second day of Lent. This journey with Christ to the Easter that never ends is an invitation that comes to us each day. And even if we fall on our face, the next day the Lord picks us up, takes us by the hand, so that we can continue the journey.

God is gracious and merciful,
slow to anger, rich in kindness.

Lent is not about what we will give up . . . rather Lent is about what God has done in Christ.  May your Lenten journey lead you to the Easter that never ends!

Today is Mardi Gras Day or Fat Tuesday as it was called.  Those of us from Mobile, Alabama, know about Mardi Gras.  We grew up going to parades.  We knew that Mardi Gras also existed in New Orleans . . . but we also knew that Mobile's Mardi Gras was older and better.  When I was little and my mom had friends studying at Charity Hospital, she took me to Mardi Gras in New Orleans.  I just remember that it wasn't like Mobile's celebration at all . . . and I never went back to New Orleans' Mardi Gras.  The reason for this season of festivities before Lent began as a necessary religious preparation for Lent itself.  During the old days, when the Lenten Fast was very strict and there was no refrigeration, Mardi Gras (from the French, literally Fat Tuesday) was essential.  It was necessary to use up all the animal-based foods before the Fast began.  In the ancient church the Fast included eggs and butter.  Which is why one received an egg at Easter.  It was a sign that the Lenten Fast was over.  It had nothing to do with Easter bunnies or Easter baskets.  In Latin American countries this season is called Carnival . . . from carne, which means meat.  Mardi Gras or Carnival is not an excuse for excess in food or drink.  It is simply a time to prepare for the great Season of Lent when the whole Church goes on retreat with the candidates for the Easter Sacraments so that all of us can be prepared to celebrate the Triduum (the Three Days)--from Holy Thursday Evening to Easter Sunday.  So let's get ready and let's celebrate!

Fifty years ago today on February 2, 1970, I was received into the Catholic Church at the Cathedral Basilica of the Immaculate Conception in Mobile, Alabama. I was 20 years old.

A few Sundays ago we heard the gospel of the call of the first disciples. With Jesus, it is always a call to follow him. We don’t stand still . . . we’re on the move. Most of the time we’re playing “catch-up”, trying to catch up with the Lord who always goes ahead of us into Galilee.

For me, it was a call to ministry and service. A mere eight years later I was ordained a priest. I could never have dreamt of a more exciting and challenging journey.

As I look back over these fifty years, I can only say “thank you” for all the moments where God’s presence has been revealed. Not many of us are able to remember our baptism . . . which is a shame. Being 20 years old made all the difference in my life. Should babies be baptized . . . well, of course. But when God works it out so that one comes to the water a little older . . . it’s not a problem, rather it’s the most remarkable experience of grace. I will always be grateful.

As we start this new year 2020, I have been remembering my mom, Norma. My mom was fearless. I remember her wanting to ride in a hot air balloon, so dutiful son that I was, I arranged it for her and her best friend. I’m not sure if her friend really wanted to go up in the balloon, but once mom climbed into the basket, her friend followed.

I think of mom and her balloon ride here at the beginning of 2020, because somehow we all need a little bit of her courage. New adventures await us. Let’s pray that we all have happy landings!

The biggest Nativity Set I think I ever saw was in an old, old church in Rome, called Saint Alessio. The Nativity Set took up the whole basement of the church. Of course, a traditional Nativity Set is basically Mary and Joseph, the cow and the donkey, shepherds and sheep, and the three kings. The Nativity Set of Saint Alessio had the traditional scene, of course . . . but it had a bit more. In fact, it had a whole lot more. The Nativity Set of Saint Alessio had many scenes . . . the first scene was the Creation of the World . . . there was the sun and the planets, and there was a miniature Adam and a miniature Eve . . . even a miniature Tree of Life and a miniature serpent to go with it. The next scene was Noah and the Ark and all the animals, there was even rainbow. Then there was Abraham and Isaac on the Mountain of Sacrifice . . . and then Moses with the Ten Commandments. Then there was the traditional nativity scene, but that wasn't the end of the story. The next scene was the Baptism of Jesus, followed by the Temptation in the Desert. Then there was the Sermon on the Mount, the Last Supper, the Agony in the Garden, the Crucifixion and Resurrection, and finally the very last scene . . . Saint Peter's Square in Rome . . . with the facade of the Basilica of Saint Peter in the background . . . and an Alitalia jetliner taking off and landing around the obelisk in the middle of the piazza. And there was a caption. It read . . . "Go into all the world and tell the Good News!" And you know, that really is the rest of the story.

You know, when the shepherds heard the message from the angel, they didn’t stay in the field with their flocks . . . no they went in search of the child wrapped in swaddling clothes and lying in a manger.

When the Magi saw the star, they didn’t stay in their comfortable homes . . . no they traveled from afar, following the star until it came to rest over the place where the child was.

When we have celebrated Christmas . . . we’ve given over 7,000 gifts for kids . . . and we think that now we can put Christmas behind us until next year . . . well, the gospel reminds us that the story is just beginning. And there’s still more work to be done.

For the Holy Family, an immigrant family, is still running for its life . . . parents struggle to find work, children are separated, some kept in cages. The richest few make trillions in surplus wealth, while the rest of humanity goes hungry. In a world that wants to get on with business as usual, the church says, “Not so fast.” Christmas is not over and done with. Like Mary who reflected on all these things and treasured them in her heart . . . we too need to remember the story of the Holy Family, the whole story . . . not just the child wrapped in swaddling clothes and lying in a manger . . . but also the exile to Egypt. Because the powers that be always want to search for and destroy the Child. The story of the Holy Family is the story of every family in need. Until every family is safe and secure, the Holy Family is still in need. And the story is not over, but goes on until we play our part.

♫ While shepherds kept their watching
o’er silent flocks by night,
Behold, throughout the heavens
There shone a holy light. ♫

And so, blessings on all our family, our great big, somewhat disorganized, and at times, very needy Holy Family!