FRIDAY, WEEK III of EASTER--Feast of Saint Joseph the Worker 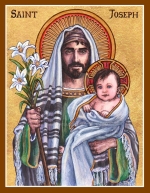 To remain in Christ and Christ in us . . . the Bread of Life Discourse makes our communion with Christ the center of our faith. And so, meal time is God time for us. The Feast of Saint Joseph the Worker reminds us of how the meals at home point to the communion we have with one another and with Christ. I remember going to bless a home when I was studying Spanish in Mexico. Over the dining room table there was a picture of the Last Supper and underneath it an inscription: El Huésped Invisible en Todas las Comidas (The Invisible Guest at Every Meal).

No one whose testicles have been crushed or whose penis has been cut off may come into the assembly of the Lord (Dt 23:2).

Eunuchs were considered an abomination . . . and couldn’t be part of the community. (The passage tells us that the eunuch had come to Jerusalem to worship . . . but being a eunuch he couldn’t even enter the Temple!) But with the guidance of the Spirit, the church set aside the Law of God in favor of inclusion and salvation, and the eunuch is baptized and “continued on his way rejoicing.”

Jesus said to the crowds, “I am the bread of life; whoever comes to me will never hunger, and whoever believes in me will never thirst.” (Jn 6:35)

In this time of Eucharist fasting due to the physical distancing necessary because of the coronavirus, we are more acutely aware of our need for the Food that satisfies every human hunger and need. Saint Catherine of Siena hungered for this Bread of Life. She is one of four women doctors of the church (along with Saint Teresa of Avila, Saint Therese of Lisieux, & Saint Hildegard of Bingen).

They threw Stephen out of the city, and began to stone him. The witnesses laid down their cloaks at the feet of a young man named Saul. As they were stoning Stephen, he called out, “Lord Jesus, receive my spirit.” Then he fell to his knees and cried out in a loud voice, “Lord, do not hold this sin against them”; and when he said this, he fell asleep. Now Saul was consenting to his execution. (Acts 7:58-60)

The story of Stephen, the first martyr (Proto-Martyr) of the church is important for the detail about Saul (who would become Paul). It is interesting that the gospel writer of Luke-Acts patterns the death of Stephen on the death of the Lord, having him echo Jesus’ words from the Cross.

Do not work for food that perishes but for the food that endures for eternal life, which the Son of Man will give you. (Jn 6:27)

To hunger for the food that lasts . . . to hunger for the food that endures for eternal life. That hunger puts us on a journey that lasts a lifetime and only ends in God. It’s kinda like the Sunday dinners at home . . . my grandmother’s fried chicken, mashed potatoes and her chicken gravy, English peas, cream-style and whole kernel corn, asparagus, and my Aunt Betty’s yeast rolls. And for dessert my mother’s Dutch apple pie. It was food that fed us for sure . . . but it was food to fill our souls. As my Mexican madrecita used to say: “Comida hecha con amor, tiene más sabor.” (Food made with love, has more flavor.) The food that the Lord provides is made with lots of love and satisfies body and soul.

The early church turned to the scriptures to try to understand the scandal of the Cross. The readings of the Easter Season reveal to us not only the preaching of the early church but also its absolute joy in the Resurrection.

The beginning of the gospel of Jesus Christ [the Son of God]. (Mk 1:1)

Sometimes we forget that when the first gospel writer put pen to paper, there had never been a gospel written before. How important that first gospel writer! Later church tradition put names to the originally anonymous four gospels. Today’s feast is not so much about a person . . . but rather the celebration of the first written gospel.