Saturday of Our Lady, the Virgin Mary, October 23 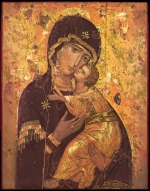 In today’s passage from the Letter to the Romans, Saint Paul is describing the internal conflict we all experience: our mind wants to do the good, but our bodies don’t cooperate. The power to overcome this very human struggle does not come from us . . . rather as Saint Paul declares: “Thanks be to God through Jesus Christ our Lord.” Today is the feast of Saint John Paul II. When she returned to her home after her trip to Rome, all my mother’s friends jokingly asked her: “Norma, who is that man in the picture with you and Morris?”

You won’t find this saying of Jesus on any Hallmark greeting card! Why would any Christian community have saved this particular saying of Jesus? It must have reflected the real lived experience of the members of that community. Many early Christians lost their families of origin when they joined this “cult” called The Way. Early Christians had to be family to one another . . . the Christian community was the only family they had left. Perhaps that’s why we still use family terms for one another in the church: sister, brother, mother, and father. The church is the family where everyone belongs, no matter what. Saint Laura Montoya (better known as La Madre Laura) is the first Colombian to be canonized. She founded a religious community and worked with the indigenous peoples. She died on October 21, 1949. Her shrine is in Medellín, Colombia.

I grew up in a church that seemed to love scaring people into being good with talk about the “end of the world.” There were so many sermons about the end times . . . you wouldn’t believe the number of sermons I heard on the European Common Market being the “beast” of the Book of Revelation. The gospel according to Luke tries to put an end to such distracting speculation. The church is in for the long haul. We don’t need to worry about the “when” of the end of the world (as my grandmother would say, “The world ends everyday when someone dies!”) . . . Luke’s gospel reminds us that it’s important that we stay busy doing the Lord’s work.

Blessed are those servants
whom the master finds vigilant on his arrival.
Amen, I say to you, he will gird himself,
have them recline at table, and proceed to wait on them. (Lk 12:35-38)

Stay in the same house and eat and drink what is offered to you,
for the laborer deserves payment.
Do not move about from one house to another. (Lk 10:1-9)

What an interesting instruction for early Christian missionaries: obviously, some missionaries were shopping around looking for better accommodations or a better table! Today is not so much the feast of a person (a gospel writer), but the feast of the gospel itself, the one we call “according to Luke.”

Not to be served, but to serve and to give his life . . . through his suffering my servant will justify many . . . the eyes of the Lord are on those who wait for his kindness to deliver them from death . . . we have a great high priest who has passed through the heavens, Jesus the Son of God, so let us confidently approach the throne of grace to receive mercy.