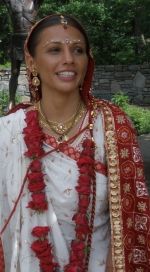 Then I saw a new heaven and a new earth.
The former heaven and the former earth had passed away,
and the sea was no more.
I also saw the holy city, a new Jerusalem,
coming down out of heaven from God,
prepared as a bride adorned for her husband.
(Rev 21: 1-2)

And one of the lepers, realizing he had been healed,
returned, glorifying God in a loud voice;
and he fell at the feet of Jesus and thanked him.
He was a Samaritan.
Jesus said in reply,
“Ten were cleansed, were they not?
Where are the other nine?
Has none but this foreigner returned to give thanks to God?”
Then he said to him, “Stand up and go;
your faith has saved you.”
(Lk 17:15-19)

They were holding God’s harps,  and they sang the song of Moses, the servant of God,  and the song of the Lamb:
“Great and wonderful are your works,  Lord God almighty.  Just and true are your ways,  O king of the nations.  Who will not fear you, Lord,  or glorify your name?  For you alone are holy.  All the nations will come  and worship before you,  for your righteous acts have been revealed.”
(Rev 15:2-4)

God’s harps! How amazing . . . the writer of the Book of Revelation must have had heard some really great church music. Enjoy the American Youth Harp Ensemble!

The phrase “the grapes of wrath” comes from this passage from the Book of Revelation and gave rise to the most famous song of the Civil War in the United States, The Battle Hymn of the Republic. It also gives the name to the most famous of John Steinbeck’s novels, The Grapes of Wrath, which tells the story of the poor Oklahoma immigrants to California during the Dust Bowl of the Great Depression. Today is the feast if the First Martyrs of Korea.

I, John, looked and there was the Lamb standing on Mount Zion,
and with him a hundred and forty-four thousand
who had his name and his Father’s name written on their foreheads.
I heard a sound from heaven
like the sound of rushing water or a loud peal of thunder.
The sound I heard was like that of harpists playing their harps.
They were singing what seemed to be a new hymn before the throne,
before the four living creatures and the elders.
(Rev 14:1-3)

As the Scriptures of today mention the sound of harpists, I think of my friend, the late Donna Germano. Donna played hammered dulcimer and harp. When I was at Saint Joan of Arc Parish in Asheville, NC, Donna would play the evening Vigil Mass on Saturday. It was heavenly. Now our dear Donna gets to play for the angels before the throne! The video is of Donna playing the English tune, Greensleaves.

THE SOLEMNITY OF OUR LORD JESUS CHRIST, KING OF THE UNIVERSE

On this feast of Christ the King, it is always good to remember what Dorothy Day, the Venerable Servant of God, said about the poor: “The mystery of the poor is that they are Jesus, and what you do for them you do to Him.”

To proclaim the greatness of the Lord . . . to sing God’s praises. It’s not just for heaven . . . we can sing right now! Today is the feast of the Presentation of the Blessed Virgin Mary. This feast is the basis for the church custom in Latin American countries to celebrate the presentation of three-year-old children to God.