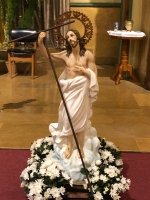 On entering the tomb they saw a young man sitting on the right side, clothed in a white robe, and they were utterly amazed. He said to them, “Do not be amazed! You seek Jesus of Nazareth, the crucified. He has been raised; he is not here. Behold, the place where they laid him. But go and tell his disciples and Peter, ‘He is going before you to Galilee; there you will see him, as he told you.’” Then they went out and fled from the tomb, seized with trembling and bewilderment. They said nothing to anyone, for they were afraid.
(Mk 16:5-8)

Mark’s gospel ends with that remarkable statement that the women “said nothing to anyone, for they were afraid” (Mk 16:8). The gospel writer was perhaps a little too smart for the audience. The gospel writer intends that WE, the hearers of the gospel, should be the ones to go and tell the leadership the good news that “he has been raised.” Unfortunately, the church misunderstood the gospel writer’s intention and was never satisfied with the ending. So through the years various “endings” to the gospel have been added. But these ”endings” rob the gospel of its punch. Because the women were told to go and tell the disciples and Peter . . . but they didn’t because they were afraid. And so the proclamation of the Good News is up to us. And just who is this “young man” clothed in a “white robed?” Perhaps he has something to do with the young man who followed Jesus and that they tried to seize in the garden "wearing nothing but a linen cloth about his body. They seized him, but he left the cloth behind and ran off naked" (Mk 14:51-52). Obviously, the young man is not an angel . . . he must be one of the recently baptized!”

Read 25 times Last modified on Thursday, 25 March 2021 16:37
Tweet
Published in General
More in this category: « EASTER FRIDAY SUNDAY of the OCTAVE OF EASTER (DIVINE MERCY SUNDAY) »
back to top