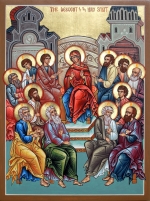 After Jesus had been taken up to heaven, the Apostles returned to Jerusalem  from the mount called Olivet, which is near Jerusalem, a sabbath day’s journey away. When they entered the city they went to the upper room where they were staying, Peter and John and James and Andrew, Philip and Thomas, Bartholomew and Matthew, James son of Alphaeus, Simon the Zealot,     and Judas son of James. All these devoted themselves with one accord to prayer, together with some women, and Mary the mother of Jesus, and his brothers. (Acts 1:12-14)

We still gather together in prayer with Peter and the others along with Mary, the Mother of Jesus.

Holy Mary,  Mother of God,  pray for us sinners now,  and at the hour of our death. Amen.

And when he had said this, Jesus breathed on them and said to them, “Receive the Holy Spirit. Whose sins you forgive are forgiven them, and whose sins you retain are retained.” (Jn 20:22-23)

Pentecost has been called the birthday of the church—in one sense it is, but Pentecost is so much more. The Gift of the Holy Spirit, the very life-breath of the Risen Lord, is a FIRE that transforms a tiny group of frightened disciples into apostles (those who are sent).

Come, Holy Spirit, fill the hearts of your faithful and kindle in them the fire of your love.

Jesus said to him the third time, “Simon, son of John, do you love me?” Peter was distressed that he had said to him a third time, “Do you love me?” and he said to him, “Lord, you know everything; you know that I love you.” Jesus said to him, “Feed my sheep. Amen, amen, I say to you, when you were younger, you used to dress yourself and go where you wanted; but when you grow old, you will stretch out your hands, and someone else will dress you and lead you where you do not want to go.” He said this signifying by what kind of death he would glorify God. And when he had said this, he said to him, “Follow me.” (Jn 21:17-19)

The three denials of Peter are countered by the three questions, "Do you love me?" in this added chapter to the Fourth Gospel (according to John). And Peter is restored to pastoral ministry. And the key words: Follow me.

Christian Unity is not optional. That we may all be one is not only the prayer of Jesus, but our unity is essential so that the world may believe.

Jesus raised his eyes to heaven and said, “Father, the hour has come. Give glory to your son, so that your son may glorify you, just as you gave him authority over all people, so that your son may give eternal life to all you gave him . . . . I pray for them. I do not pray for the world but for the ones you have given me, because they are yours, and everything of mine is yours and everything of yours is mine, and I have been glorified in them. And now I will no longer be in the world, but they are in the world, while I am coming to you.” (Jn 17: 1-2, 9-11a)

The 17th chapter of the Fourth Gospel has been called the High Priestly Prayer of Jesus. And it is interesting in that we get to “overhear” Jesus praying. And what a prayer! Like an Old Testament king praying for the troops before a battle, Jesus prays for the disciples. As the Letter to the Hebrews says: Jesus lives to make intercession for us (Hebrews 7:25).