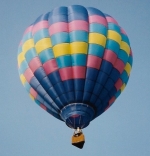 As we start this new year 2020, I have been remembering my mom, Norma. My mom was fearless. I remember her wanting to ride in a hot air balloon, so dutiful son that I was, I arranged it for her and her best friend. I’m not sure if her friend really wanted to go up in the balloon, but once mom climbed into the basket, her friend followed.

I think of mom and her balloon ride here at the beginning of 2020, because somehow we all need a little bit of her courage. New adventures await us. Let’s pray that we all have happy landings!

The biggest Nativity Set I think I ever saw was in an old, old church in Rome, called Saint Alessio. The Nativity Set took up the whole basement of the church. Of course, a traditional Nativity Set is basically Mary and Joseph, the cow and the donkey, shepherds and sheep, and the three kings. The Nativity Set of Saint Alessio had the traditional scene, of course . . . but it had a bit more. In fact, it had a whole lot more. The Nativity Set of Saint Alessio had many scenes . . . the first scene was the Creation of the World . . . there was the sun and the planets, and there was a miniature Adam and a miniature Eve . . . even a miniature Tree of Life and a miniature serpent to go with it. The next scene was Noah and the Ark and all the animals, there was even rainbow. Then there was Abraham and Isaac on the Mountain of Sacrifice . . . and then Moses with the Ten Commandments. Then there was the traditional nativity scene, but that wasn't the end of the story. The next scene was the Baptism of Jesus, followed by the Temptation in the Desert. Then there was the Sermon on the Mount, the Last Supper, the Agony in the Garden, the Crucifixion and Resurrection, and finally the very last scene . . . Saint Peter's Square in Rome . . . with the facade of the Basilica of Saint Peter in the background . . . and an Alitalia jetliner taking off and landing around the obelisk in the middle of the piazza. And there was a caption. It read . . . "Go into all the world and tell the Good News!" And you know, that really is the rest of the story.

You know, when the shepherds heard the message from the angel, they didn’t stay in the field with their flocks . . . no they went in search of the child wrapped in swaddling clothes and lying in a manger.

When the Magi saw the star, they didn’t stay in their comfortable homes . . . no they traveled from afar, following the star until it came to rest over the place where the child was.

When we have celebrated Christmas . . . we’ve given over 7,000 gifts for kids . . . and we think that now we can put Christmas behind us until next year . . . well, the gospel reminds us that the story is just beginning. And there’s still more work to be done.

For the Holy Family, an immigrant family, is still running for its life . . . parents struggle to find work, children are separated, some kept in cages. The richest few make trillions in surplus wealth, while the rest of humanity goes hungry. In a world that wants to get on with business as usual, the church says, “Not so fast.” Christmas is not over and done with. Like Mary who reflected on all these things and treasured them in her heart . . . we too need to remember the story of the Holy Family, the whole story . . . not just the child wrapped in swaddling clothes and lying in a manger . . . but also the exile to Egypt. Because the powers that be always want to search for and destroy the Child. The story of the Holy Family is the story of every family in need. Until every family is safe and secure, the Holy Family is still in need. And the story is not over, but goes on until we play our part.

♫ While shepherds kept their watching
o’er silent flocks by night,
Behold, throughout the heavens
There shone a holy light. ♫

And so, blessings on all our family, our great big, somewhat disorganized, and at times, very needy Holy Family!

The twenty-fifth day of December.

In the five thousand one hundred and ninety-ninth year of the creation of the world from the time when God in the beginning created the heavens and the earth;

the two thousand nine hundred and fifty-seventh year after the flood;

the two thousand and fifteenth year from the birth of Abraham;

the one thousand five hundred and tenth year from Moses
and the going forth of the people of Israel from Egypt;

the one thousand and thirty-second year from David's being anointed king;

in the sixty-fifth week according to the prophecy of Daniel;

in the one hundred and ninety-fourth Olympiad;

the seven hundred and fifty-second year from the foundation of the city of Rome;

the forty second year of the reign of Octavian Augustus;

the whole world being at peace, in the sixth age of the world, Jesus Christ the eternal God and Son of the eternal Father, desiring to sanctify the world by his most merciful coming, being conceived by the Holy Spirit, and nine months having passed since his conception, was born in Bethlehem of Judea of the Virgin Mary, and was made man.

The Nativity of our Lord Jesus Christ according to the flesh.
(The Roman Martyrology)

May the Christ Child be born in you!

When the angels went away from them to heaven,
the shepherds said to one another,
"Let us go, then, to Bethlehem
to see this thing that has taken place,
which the Lord has made known to us."
So they went in haste and found Mary and Joseph,
and the infant lying in the manger. (Lk 2:15-16)

For a child is born to us, a son is given to us;
upon his shoulder dominion rests.
They name him Wonder-Counselor, God-Hero,
Father-Forever, Prince of Peace. (Is 9:5)

A blessed Christmas to you all!

Of the Father’s love begotten,
Ere the worlds began to be,
He is Alpha and Omega,
He the source, the ending He,
Of the things that are and have been,
And that future years shall see,
Evermore and evermore.
Prudentius (b. 348)

O Emmanuel:
O Emmanuel, king and lawgiver, desire of the nations, Savior of all people, come and set us free, Lord our God.

The prophet Isaiah said, “The Lord himself will give you this sign: the Virgin shall be with child, and bear a son, and shall name him Emmanuel.” (7:14). And as Matthew’s gospel reminds us: “Emmanuel” means “God is with us.” (Mt 1:23)

Shall come to thee, O Israel

O Rex Gentium
O King of all the nations, the only joy of every human heart; O Keystone of the mighty arch of man, come and save the creature you fashioned from the dust.

Isaiah the prophet said: “For a child is born to us, a son is given us; upon his shoulder dominion rests. They name him Wonder-Counselor, God-Hero, Father-Forever, Prince of Peace.” (9:5).
And then Isaiah went on to say: “He shall judge between the nations, and impose terms on many peoples. They shall beat their swords into plowshares and their spears into pruning hooks; one nation shall not raise the sword against another, nor shall they train for war again.” (2:4) .

O come, Desire of nations, bind
In one the hearts of all mankind;
Bid every strife and quarrel cease
And fill the world with heaven's peace.

O Oriens
O Radiant Dawn, splendor of eternal light, sun of justice: come, shine on those who dwell in darkness and the shadow of death.

The prophet Isaiah said: “The people who walked in darkness have seen a great light; upon those who dwelt in the land of gloom a light has shown.” (9:1).

O come, Thou Dayspring from on high,
And cheer us by thy drawing nigh;
Disperse the gloomy clouds of night
And death's dark shadow put to flight.