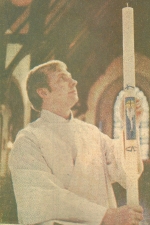 O happy fault,
O necessary sin of Adam
that gained for us so great a Redeemer!
Most blessed of all nights chosen by God
to see Christ rising from the dead!
—The Exultet

When the sabbath was over,
Mary Magdalene, Mary, the mother of James, and Salome
bought spices so that they might go and anoint him.
Very early when the sun had risen,
on the first day of the week, they came to the tomb.
They were saying to one another,
“Who will roll back the stone for us
from the entrance to the tomb?”
When they looked up,
they saw that the stone had been rolled back;
it was very large.
On entering the tomb they saw a young man
sitting on the right side, clothed in a white robe,
and they were utterly amazed.
He said to them, “Do not be amazed!
You seek Jesus of Nazareth, the crucified.
He has been raised; he is not here.
Behold the place where they laid him.
But go and tell his disciples and Peter,
‘He is going before you to Galilee;
there you will see him, as he told you.’”
The women fled from the tomb
and said nothing to anyone,
for they were afraid.
(Mk 16:1-8)

The gospel writer Mark puts a lot on our shoulders . . . the women fled and said nothing to anyone. Guess it’s up to us to tell the Good News:
Christ is risen!
He is risen indeed!
Alleluia, alleluia!

More in this category: « HOLY SATURDAY EASTER SUNDAY »
back to top