EXALTATION OF THE HOLY CROSS—September 14 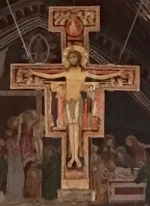 Have among yourselves the same attitude that is also yours in Christ Jesus,
who, though he was in the form of God,
did not regard equality with God something to be grasped.
Rather, he emptied himself,
taking the form of a slave,
coming in human likeness;
and found human in appearance,
he humbled himself,
becoming obedient to death,
even death on a cross.
(Phil 2:5-8)

To have the same the same attitude as Christ . . . means to have the mind and heart of Christ. We want to accept the cross not as an obligation, but rather out of love. To be able to imitate Christ who emptied himself, so that Christ may now live in us.

The picture today is of the San Damiano Cross that now hangs in the Basilica of Saint Clare in Assisi.

Read 10 times Last modified on Saturday, 12 September 2020 07:52
Tweet
Published in General
More in this category: « XXIV ORDINARY SUNDAY MEMORIAL OF OUR LADY OF SORROWS—September 15 »
back to top