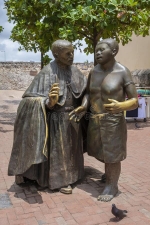 Most of us could probably come up with one or two of the Beatitudes if we had too . . . but the WOES? I don’t think so. We usually don’t spend much time on those. And perhaps that’s a mistake. When the church speaks about the preferential option for the poor, or when Pope Francis talks about a poor church, a church for the poor, we are entering into the mystery of the kingdom, and the secret of the saints. Saint Peter Claver came to Colombia to be a minister of the gospel, and what he found were the horrors of the slave trade. He dedicated the rest of his life to be a “slave to the slaves.”

Today’s picture is of the memorial to Saint Peter Claver (pictured with a slave) in Cartagena de Indias, Colombia.

Read 15 times Last modified on Sunday, 06 September 2020 19:54
Tweet
Published in General
More in this category: « THE NATIVITY OF THE BLESSED VIRGIN MARY—September 8 THURSDAY, WEEK XXIII, ORDINARY TIME »
back to top