WEDNESDAY, WEEK V of EASTER, Our Lady of Fatima, May 13 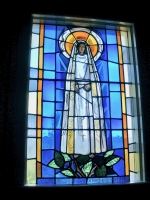 Some who had come down from Judea were instructing the brothers, “Unless you are circumcised according to the Mosaic practice, you cannot be saved.” (Acts 15:1)

From the beginning of the church there have always been folks who wanted to exclude others. “If you don’t do such-and-such or believe this-or-that, you’re not a real Catholic.” Thank goodness the Lord reminds us that He’s the Vine, we’re just the branches . . . only one thing is necessary to stay rooted in Him.

It’s the same story with Our Lady of Fatima. The message of Fatima has nothing to do with secrets, nor visions of Hell, nor messages from angels, nor threats of dire punishments. Basically, the message is very simple: “Repent and pray!”