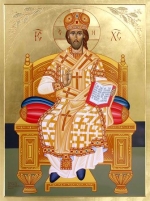 The (apostles) strengthened the spirits of the disciples and exhorted them to persevere in the faith, saying, “It is necessary for us to undergo many hardships to enter the Kingdom of God.” They appointed presbyters for them in each Church and, with prayer and fasting, commended them to the Lord in whom they had put their faith. (Acts 14:22-23)

Ministry in the early church was fluid. Apostles and teachers eventually give way to overseers (bishops) and elders (presbyters). And of course there were always the table-waiters (deacons). What is interesting is that the early church did not use religious terms for its ministers. The early church knew about priests and high priests (Jewish Temple) and pontiffs (Roman State religion), but it chose not to use those terms. Rather, overseers, elders and table-waiters, terms from everyday life described the ministry and the service to which they were called. It was only much later did those other terms began to be used of Christian ministers . . . but only by way of analogy. In the New Testament there was only one priesthood,  that of our Great High Priest, Jesus Christ, and of the entire priestly people of God.